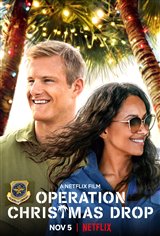 Congressional aide Erica Miller (Kat Graham) does research into something known as Operation Christmas Drop for Congresswoman Angie Bradford (Virginia Madsen). She discovers the local Air Force has been using cargo planes to drop off gifts and supplies to remote islands at Christmas.

Since the military has been looking to close bases, Bradford wonders if this is one of the ones that should get notice. When Erica protests, Bradford orders her to go to the island and look into it, which means Erica has to miss her own family Christmas.

She is met on the island by Captain Andrew Jantz (Alexander Ludwig), who takes her to the beachside Air Force base. He shows her around so she can see what the local Air Force does, including delivering medicine, food, toys and gifts to almost 30,000 people on 56 different islands. Although her first impression of Andrew leaves her cold, she slowly discovers there's more to him than meets the eye.