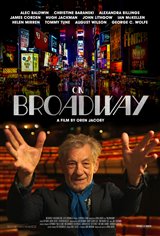 Broadway was on the verge of bankruptcy in the 1970s with talk of tearing down theaters and replacing them with parking lots. Plays were considered obsolete and audiences were severely declining. This documentary explores how, thanks to innovative work, a new attention to inclusion and the sometimes-uneasy balance between art and commerce, an industry on the verge of extinction not only avoided collapse, but managed to reinvent itself and come back stronger.

Legends of the stage and screen take us behind the scenes of Broadway’s most groundbreaking and beloved shows, from A Chorus Line to Angels in America and Hamilton. Some of today’s most influential playwrights, directors, choreographers, performers and producers are also interviewed. They tell the stories of the remarkable changes they helped initiate or witnessed over the past 50 years, the devastating impact of the AIDS epidemic on the theater community, and track the breakthrough works and artists that made Broadway into a venue where one can find everything — from the experimental and iconoclastic to the mainstream and commercial.