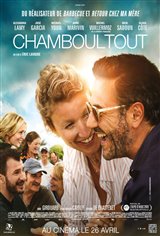 Beatrice’s novel, La grande traversée, based on last five years of her life with her husband Frederic, has just been published. Since his scooter accident five years earlier, Frederic has been blind. He was in a coma for three months following the accident and has since become bulimic. To make things worse, he lost all sense of inhibition, saying everything that’s on his mind, no matter how inappropriate. To celebrate the release of her book, the pretty, vivacious woman invites her loved ones to a beautiful villa by the sea. But the meeting turns quickly sour. Because although she took care to change the names of the characters in the novel, each of the guests easily recognize themselves.