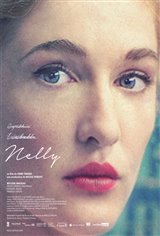 A biopic of Canadian prostitute and writer Nelly Arcan (played by one of TIFF's 2016 rising stars, Mylène Mackay), whose real name was Isabelle Fortier. She rocked the French literary world with her 2001 semi-autobiographical novel, Putain (Whore), based on her experiences as a call girl.

The book was a huge success and was short-listed for several prizes. She went on to have a weekly column in Ici magazine and she also wrote three more books, which dealt with such themes as power, gender, loneliness, the commodification of female beauty, and suicide.