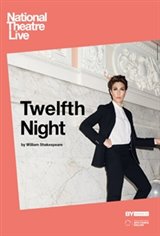 When the ship they were traveling on is wrecked on the rocks on the coast of Illyria, Viola washes ashore but her twin brother Sebastian is lost. Believing Sebastian to have drowned, she disguises herself as a young man named Cesario.

She secures a position with Duke Orsino, who believes he's in love with Olivia, whose father and brother recently died. In mourning, Olivia has decided to avoid the company of men for seven years. Duke send "Cesario" as his messenger to tell Olivia of his love for her.

Viola has fallen in love with the Duke herself, but does as he wishes. Olivia, who doesn't realize Cesario is a woman, falls in love with him, in spite of her vow to avoid men.

So begins a whirlwind of mistaken identity and unrequited love. The nearby households of Olivia and Orsino are overrun with passion. Even Olivia's upright housekeeper Malvolia (Tamsin Greig) is swept up in the madness. Where music is the food of love, and nobody is quite what they seem, anything proves possible.