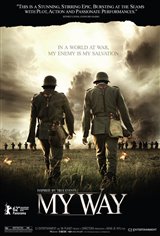 Young rival marathon runners Korean native Kim Jun-shik and Japanese aristocrat Tatsuo Hasegawa wind up in the Japanese army, fighting against the Chinese and Soviets. When they're both taken prisoner by the Soviets, their mutual hatred and mistrust boils over into violence.

Against all odds they both survive to take part in one more terrible battle, this time at Normandy Beach, bonded together by their history as they struggle to hold on until the Allies arrive.