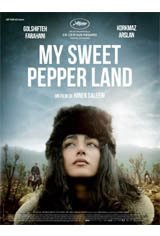 April 2003. Kurdistan is finally free. The institutions and the administration of the country, once occupied by Saddam Hussein’s troops, are in operation again. However, the country falls ruin to barbarism as the infrastructure of the newly autonomous nation enables regional warlords. Disheartened, police officer Baran wants to give up his job in the force, but decides to ask for a transfer instead. He’s assigned to Qamarian, a small village on the borders of Turkey, Iran and Iraq. Instead of finding peace as he’d hoped, he’s contacted by local kingpin Aziz Aga, who offers Baran protection in return for looking the other way. Baran turns him down. Govend, a single teacher who has just returned home, finds locals aren’t interested in having their children educated and when Aziz Aga’s crew tries to humiliate her, Baran comes to her defense.