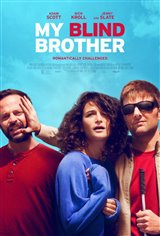 Robbie (Adam Scott) is a blind athlete, loved by his community and hailed as a local sports hero. Meanwhile, his brother Bill (Nick Kroll) knows that Robbie is actually sullen and arrogant. Bill is jealous because although he runs every marathon by Robbie's side, but never complains when he doesn't receive the same adoration as his brother.

When Bill crushes on a new girl (Jenny Slate), he thinks his luck may be turning around. That is, until his brother tells him he likes the same girl, and their rivalry reaches its peak during a charity swim competition.