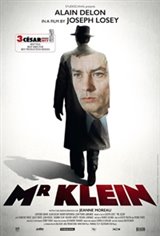 Alain Delon plays Mr. Klein, a French-Catholic art dealer who works as a school principal during the Nazi occupation. Strapped for cash, Klein takes financial advantage of his Jewish neighbors, knowing that they have no legal recourse. Ironically, Klein is himself mistaken for a missing Jew, a man who has been using Mr. Klein's name as a cover for his secret operations. As he desperately seeks out that man, he learns a bitter lesson about life in the other man's shoes. Star Delon is one of the four producers of this French feature.