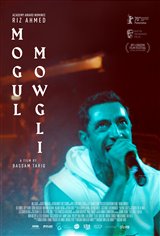 Just as he's about to embark on his first international tour, British Pakistani rapper Zed (Riz Ahmed) decides to fly home to the U.K. to visit his family after a two-year absence.

As he's visiting his parents, he begins to feel ill and discovers he has an autoimmune disease. As his condition worsens and his big breakthrough moment is in danger of vanishing into thin air, Zed is forced to face his past, his family, and the uncertainty of his legacy as he descends into a physical and emotional crisis, amplified by vivid hallucinations.