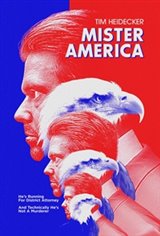 Tim Heidecker reprises his role as himself from the intentionally bad movie review show On Cinema at the Cinema that began as a podcast, became a web series and was eventually made part of the Adult Swim Cartoon Network brand. In this comedy mockumentary, Tim Heidecker decides to run for district attorney of San Bernardino, California.

Why? Because as one of the promoters of a desert EDM music festival, Tim gave the crowd faulty e-cigarettes, which left a number of people dead. After beating a mass murder charge for his part in the catastrophe, Tim is so resentful about being prosecuted that he decides to run against San Bernadino District Attorney Vincent Rosetti (Don Pecchia) for revenge. However, because he doesn't actually reside in San Bernardino, he has to live in a hotel, running his campaign out of his room. Due to his extreme lack of likability and his inability to connect with constituents, it doesn't go well.