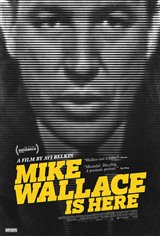 Mike Wallace interviewed many of the 20th century's most influential figures on the TV news series 60 Minutes. During his 39 years on the show, Wallace interrogated his subjects, leaving no stone unturned. Over the course of his career, Wallace won a Golden Globe and numerous Emmy awards. This documentary takes a scrutinous gaze at how we arrived at the precarious media tipping point menacing our democracy today.

Uncovering decades of never-before-seen archival footage from the 60 Minutes vault, filmmaker Avi Belkin crafts a portrait that goes beneath the surface to explore what drove and plagued the investigative reporter, whose controversial career and troubled personal life were inherently entwined with the evolution of broadcast journalism itself.