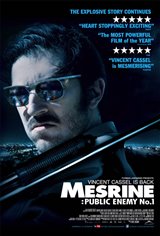 3 votes and 1 Reviews | Write a Review

Paris, 1973. In open court, Jacques Mesrine pulled out a gun and took the judge hostage until he could get to the door of the courthouse, where his accomplices were waiting. The event made this bold robber and murderer, who escaped from prison twice, Public Enemy Number One as well as a media favorite. In fact, the press was so intoxicated by Mesrine that he set up an interview with them to cement his legend. Caught in a trap by Commissioner Broussard's men, Mesrine surrendered and was sentenced to twenty years imprisonment. Five years later, he managed to escape again, with the help of his accomplice François Besse. Now, Public Enemy no longer has any illusions about his chances of surviving another trap.