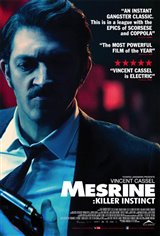 The first part of an epic crime saga charting the rise to notoriety of Jacques Mesrine in the '60s and '70s. Picking up at the the time of Mesrine's release from the Army following the Algerian War, the first tranche captures his descent into the criminal underworld, as he becomes embroiled with gangsters and develops his talent for armed bank robbery, kidnapping and prison breaks.