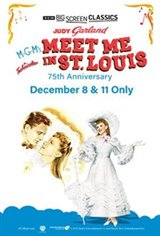 Judy Garland and Margaret O'Brien star in this heartwarming tale of the emotional trauma the colorful members of an early 20th century St. Louis family experience when they learn their father has been transferred--and they will have to move to New York. This anniversary event includes exclusive insights from Turner Classic Movies.