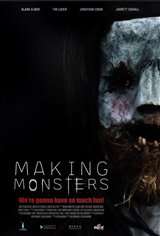 Chris (Tim Loden) and his fiancée Allison (Alana Elmer) are internet celebrities who are famous for their YouTube prank show, in which Chris scares Allison by wearing a mask and jumping out of nowhere. Allison hates everything to do with the videos and is getting tired of always being the target of Chris' pranks, so she gets him to agree to put a stop to it, especially since they want to have a baby, and a doctor advised them to eliminate stress from their lives.

When they get an invitation from one of Chris' old friends, Jesse, to spend the weekend up north at his newly renovated cottage, they eagerly accept. Once there, Jesse is nowhere to be seen, but they're greeted by his eccentric fiancé David (Jonathan Craig), who explains that Jesse is running late. The three spend the evening together eating and drinking, but in the morning, things have completely changed. David is missing and there's a masked murderer in the woods. Not only that, but a ghost from the cemetery gravitates to Allison, who may be psychic.