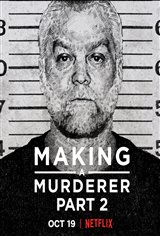 This 10-episode documentary series follows the story of Steven Avery, who spent 18 years in prison for a rape he didn't commit. He's released when DNA evidence points to another man, who confessed to the assault eight years earlier. At the time, police dismissed the confession, insisting they had the right man.

The show begins with Steven's release, as he gets a fresh start on life. However, just after he launches a lawsuit for $36 million in damages for his wrongful imprisonment against the police department, sheriff and district attorney of Manitowoc County, a woman goes missing.

The missing woman is Teresa Halbach, a photographer for a local auto trader magazine who'd met with Steven the afternoon before she disappeared to take photos of cars he was selling. Her murder is pinned not only on Steven, but on his intellectually disabled teenage nephew, Brendan Dassey. Despite obvious tampering with the evidence in order to make Steven appear guilty, and a coerced confession from a clearly browbeaten 16-year-old Brendan, both are convicted, despite public outcry in regards to police corruption.

In the second season, we meet Steven's new lawyer, Kathleen Zellner. She's known for getting imprisoned innocent men new trials and eventually, their freedom. She examines the evidence, which clearly shows that it was tampered with, and sets out to discover who could have committed the crime. What she uncovers will unravel the Avery family even further. The season also shows how determined the police and the District Attorney's office of the state of Wisconsin are about keeping Steven and Brendan in prison, no matter how much the evidence shows that they're both innocent and how many judges want to grant Brendan his freedom due to his obviously false confession.