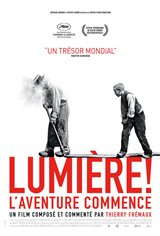 In 1895, Louis and Auguste Lumière invented the motion picture camera and changed the way the world sees itself. This montage film brings together restored versions of 114 of the 1,422 50-second films made by the Lumière brothers and their teams, between the years of 1895 and 1905. Filming around the world, these pioneers captured the spirit and paradoxes of their time, but also discovered the traveling, the panoramic and the sequence shot. In short, they explored the world through their cameras while laying the foundations of filmmaking.