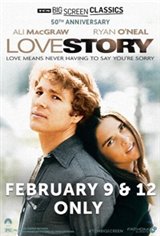 Harvard Law student Oliver Barrett IV (Ryan O'Neal) and music student Jennifer Cavilleri (Ali MacGraw) share a chemistry they cannot deny-and a love they cannot ignore. Despite their opposite backgrounds, the young couple put their hearts on the line for each other. Soon, what began as a brutally honest friendship becomes the love story of their lives.

This beloved film was nominated for seven Academy Awards®, including an Oscar®-winning musical score that became the poignant theme of the timeless romance.