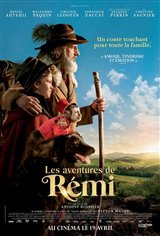 Remi, who was abandoned as a baby at a village church, is given to the care of a farmer’s wife named Mrs. Barberin, who loves Remi as if he were her own. However, 10 years later, her husband, Mr. Barberin, decides to take Remi to an orphanage, because they can no longer afford to take care of him. During the journey, they meet Signor Vitalis, a street musician who performs with his dog Capi and a small monkey named Joli-Coeur. Vitalis offers Mr. Barberin 30 francs to rent Rémi over the course of one year, in order to integrate the boy into his act. Thus begins a new life for the little boy who, in addition to learning to read and write, becomes a street performer. Vitalis treats Remi with great kindness and tenderness. But as the duo travel from village to village, they encounter many dangers on the road. The situation worsens when Vitalis, who turns out to be hiding a troubled past under a false identity, contracts tuberculosis.