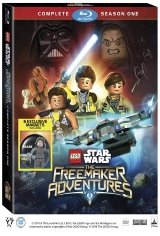 Set between the events of The Empire Strikes Back and Return of the Jedi, season one of LEGO Star Wars: The Freemakers Adventures centers around a family called "The Freemakers," who scavenge, build, and sell starships constructed from various galaxy debris.

One day, the Freemakers' youngest son discovers an ancient artifact – the Kyber Saber – that is revealed to have a natural connection with the Force. He and his family are soon embroiled in an epic battle against the Empire in order to reestablish peace within the galaxy. Through their struggle, they meet new and familiar friends, and ultimately explore new worlds they would have never seen before.