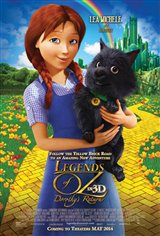 Dorothy wakes up in Kansas to find it devastated by the tornado that had whisked her away to the magical Land of Oz. The home she was so desperate to return to has been shattered; the townspeople, with nowhere to turn, are packing up and moving out.

Distressed and overwhelmed, Dorothy suddenly finds herself transported back to Oz in a giant rainbow. Oz is also in trouble, and Dorothy’s old friends the Scarecrow, Tin Man and the Cowardly Lion, have been captured and the land is in a state of decay. As Dorothy journeys to find and rescue her friends, she encounters a number of new companions, including an oversized Owl who thinks with his stomach, a man made of marshmallows who can’t think for himself, a china doll princess whose bossiness is a cover for her fragility and an aging tree willing to transform himself for an adventure.

Dorothy must help this misfit group face their challenges and band together against a wicked Jester who will not stop until all of Oz is under his control. In facing the challenges along the way, Dorothy learns that the group is stronger than the individual, and that if they only work together, people can do anything – a valuable lesson for her to bring back with her to Kansas.