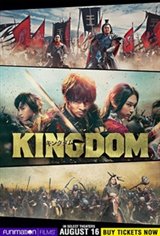 Set in ancient China, where a young orphan, Li Xin, dreams of becoming a general in order to rise from his low status in life as a servant boy. His journey to becoming the Qin Kingdom`s greatest general is set in motion when he and Ying Zheng, the boy who is set to one day be the Qin emperor, become each other`s ally.

They work together to reclaim Zheng`s throne and unite the Warring States.