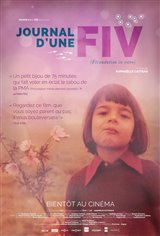 Raphaëlle and Rodolphe met in their early forties. However, like many other couples of the same age, they have difficulty getting pregnant, despite desperately wanting a child.

Feeling their hopes of having a family begin to dwindle, they turn to medically assisted procreation, thanks to the services of the renowned professor René Frydman, the "father" of the first French test tube baby.

After an unsuccessful attempt at artificial insemination, Raphaëlle chooses in vitro fertilization, a demanding and uncertain process, which Rodolphe films, step by step, with his cell phone.