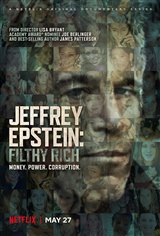 Stories from survivors fuel this docuseries examining how convicted sex offender Jeffrey Epstein used his wealth and power to carry out his abuses.

The series also takes a look at whether Epstein really killed himself in prison as officials claimed, or whether he was killed in his cell. It delves into his wealth and how he was known as a figure of mystery. He had his own private island in the Caribbean that was nicknamed "the pedophile island." He also had many famous friends who took part in his wild adventures involving underage girls, with several men named who are now facing disgrace themselves.