Jappeloup: The Road to Victory 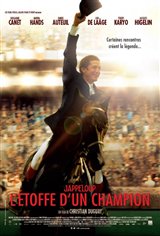 A talented rider, Pierre Durand began a promising show jumping career in the mid-1970s with encouragement and unconditional support from his parents. As a young adult, at one point he gave up competing to become a lawyer, but he couldn’t stay away from the sport. Especially when he came across Jappeloup, a small Warmblood horse with a strong character and exceptional scope.