Iris: A Space Opera by Justice 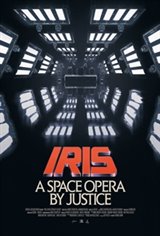 The band Justice created a unique live performance filmed especially for cinemas. Adapted from the live show "Woman Worldwide", widely considered to be one of the greatest electro concerts ever produced, Iris: A Space Opera by Justice is a totally immersive visual and auditory experience.

Justice won the 2019 Grammy Award for Best Dance/Electronic Album of the Year.This one-time only U.S. concert film is introduced with a 24-min "making-of" documentary featuring interviews with Justice and the creative team behind this extraordinary show.