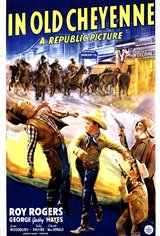 Newspaper reporter Steve Blane (Roy Rogers) is sent to Cheyenne, Wyo., to write about frontier outlaw Arapahoe Brown (George "Gabby" Hayes). But as Blane spends time in the cow town, he realizes that the conventional wisdom is all wrong. Arapahoe has been made a scapegoat for crimes perpetrated by power-hungry rancher Sam Drummond (George Rosener).

As Blane attempts to report the truth, he finds himself caught in the middle of a dangerous feud between cattlemen and settlers.