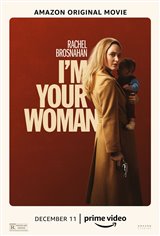 In the 1970s, Jean (Rachel Brosnahan) and her husband Eddie (Bill Heck) have tried to have a child, but it looks like that just isn't in the cards for them. Soon after they've given up trying, he shows up with a baby and hands it to her, telling her the infant is theirs. Later, when he goes out to commit a robbery, she's awakened hours later by loud knocking on the door. It's her husband's associate Jimmy, who tells her the robbery went bad, and that Cal (Arinzé Kene), whom she's never heard of, will be along to work out where she's going to go.