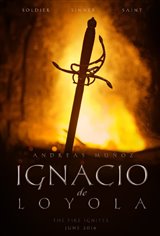 Told from the perspective of a young priest tasked with defending Ignatio before the Spanish Inquisition, this Spanish-language film follows the story of the young and ambitious Iñigo Lopez de Loyola who dreams of becoming a top ranking military official. However, his desires are halted when he is injured in the Battle of Pamplona.

During his recovery, Iñigo experiences a conversion and decides to dedicate his life to God. He travels to Montserrat where he lives in solitude in the caves outside of Manresa. Following a long month of seclusion, Iñigo finally emerges as Ignatius, the saint who will "set the world on fire."