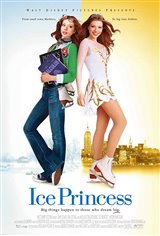 Brainy Casey Carlyle (Michelle Trachtenberg) has never quite fit in. Caught between her fantasy of becoming a championship figure skater and her strong-willed mother (Joan Cusack), who has her on the fast track to Harvard, she can only hope to be like Nikki, Tiffany and Gen (Hayden Panettiere) -- three elite skating prodigies who are ruthlessly competing on the US Figure Skating circuit (and have attitudes to match). But when Casey gets the chance to train with Gen and her coach, a disgraced former skating champion who also happens to be Gen's mother (Kim Cattrall), she must dash her own mother's hopes in order to pursue her dream. Now, with only the support of Gen's teenage brother, a hunky Zamboni driver (Trevor Blumas), Casey takes on the challenge of her life when she finds herself competing against the best to make it into the championship circuit and become a real "ice princess."

Canadian Connection: Filmed in Toronto, Ontario. Several of the cast members are Canadian.