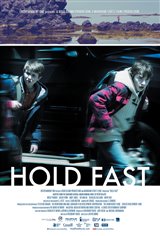 Michael, 14, lives in a fishing village in Newfoundland but his world turns upside down when his parents are killed in a car accident. He's sent to live in a city, where he constantly gets into trouble at school and at home, with his strict Uncle Ted.

After another fight at school, Michael decides not to stay where he's not wanted. His timid cousin Curtis begs Michael to let him come with him and together they set off on a quest into the Newfoundland wilderness for freedom and belonging, determined to prove they can survive on their own.