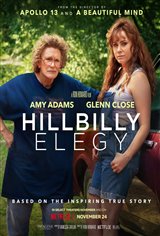 A grandmother known as Mamaw (Glenn Close) tells her young grandson, J.D. (Owen Asztalos), that it's up to him to decide whether he wants to make something of his life. She tries to keep things together for the boy despite his wreck of a mother (Amy Adams), who has serious addiction issues, making his childhood especially difficult.

After high school, J.D. (Gabriel Basso) goes on to be accepted at Yale to study law, but when an urgent phone call pulls him back to his Ohio hometown, he reflects on three generations of his family history and his own future.

Based on J.D. Vance's bestselling memoir of the same name.