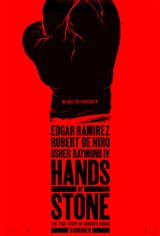 Roberto Durán, a.k.a. "Manos de Piedra" a.k.a. "Hands of Stone" is a former professional boxer who is widely regarded as one of the greatest boxers of all time, having earned four world championships in four separate weight classes during his over 30-year career.

He was born Roberto Durán Samaniego on June 16, 1951 in "La Casa de Piedra" (The House of Stone) in the slums of El Chorrillo, Panama. When Roberto was young, his father, Margarito Durán Sánchez, a Mexican-American originally from San Antonio, Texas, was transferred to Arkansas to serve in the U.S. Army. Roberto didn't see him again until 1976. Roberto's mother, Clara Samaniego, a native of Guararé, Panama, had to raise her eight children alone.

Growing up in poverty, Roberto earned money by shining shoes, selling newspapers and dancing on street corners. His love of boxing came at an early age, as he began sparring with experienced boxers at the Neco de La Guardia gymnasium in Panama City at just eight years old. Eight years after that, in 1968, he turned pro.

The young fighter started his career as a lightweight and worked his way up the rankings by scoring major knockout victories. The first was over future Featherweight Champion Ernest Marcel, followed by former Super Featherweight Hiroshi Kobayashi, culminating in his first title fight against reigning champ Ken Buchanan. On June 26, 1972, Roberto, a two-to-one underdog, defeated Buchanan in a controversial 13-round TKO, claiming the WBA Lightweight Championship at just 20 years old.

After a string of non-title fights and a total of 31 wins, Roberto suffered his first loss in a non-title light welterweight bout against Esteban de Jesús in late 1972. However, the loss did not slow the lean and hungry fighter down, as he went on to ring up 41 consecutive victories, including title defenses against Jimmy Robertson, Hector Thompson and future Lightweight champion Guts Ishimatsu. It was around this time that he earned the nickname "Manos de Piedra" or "Hands of Stone" — because of his impressive speed and powerful punches. He soon found retribution against De Jesús by defeating the champ in a brutal 11th round knockout, and then again in a third bout, adding the WBC Lightweight title to his collection. In February 1979, he moved up to the welterweight class.

As a welterweight, Roberto earned a pair of wins against former WBC Welterweight Champion Carlos Palomino and Zeferino Gonzales, setting the stage for a title fight. The pinnacle of his career soon followed on June 20, 1980 in the "Brawl at Montreal" at Olympic Stadium, where he beat the undefeated Olympic gold medalist Sugar Ray Leonard over 12 rounds to claim the WBC Welterweight Championship.

After defeating Leonard in Montreal, Roberto became a national celebrity in his homeland of Panama. He began partying — drinking and eating heavily — which caused him to gain a lot of weight. Leonard used this to his advantage, initiating the rematch clause for later that year. Their subsequent November 25 fight ended on a bizarre note. Halfway into the eighth round, after Leonard had gained a slight lead in the scorecards, Roberto simply stopped fighting, allowing his opponent to regain his title. The enduring legend is that Roberto begged to be released from the fight, calling "no más" (no more); however, the fighter denies saying that. He claims he told his trainer at the time: "No quiero pelear con el payaso" (I do not want to fight with this clown). Rumors swirled that he quit because of stomach cramps, while others state he knew he was going to lose and took the easy way out.

It took some months for Roberto to recover from that defeat, but he soon gained more weight to contend for the WBC Light Middleweight title. He lost his first attempt at the title against Wilfred Benítez in a 15-round unanimous decision. He also lost his comeback fight against newcomer Kirkland Laing in September 1982 in Detroit. After an underwhelming 10-round walk out win against Englishman Jimmy Batten, Roberto decided to make a change in his career and signed with promoter Bob Arum. This move marked the beginning of a comeback that would lead him to a second attempt at the light middleweight title. On June 16, 1983 — his 32nd birthday — Roberto snatched the WBA Light Middleweight title from WBA Champion Davey Moore in a brutal eight rounds. After the victory, an emotional Roberto was hoisted in the air while the Madison Square Garden crowd sang "Happy Birthday." This was Roberto's third world title and the comeback of his career.

He packed on more pounds to fight undefeated Middleweight Champion Marvelous Marvin Hagler. Roberto was praised for his tenacity and stamina, lasting the full 15 rounds before suffering a defeat. However, his following fight in June 1984 was not so revered. After a brutal second-round knockout at the hands of WBC Champion Thomas "Hitman" Hearns, Roberto was stripped of his Light Middleweight title. This marked the first time Roberto had been knocked out in a fight.

The aging fighter did not enter the ring again until February 24, 1989, where he won the WBC middleweight title against Iran Barkley. The exciting comeback bout was named the 1989 "Fight of the Year" by The Ring. Roberto's reign was shortlived, as later that year he fought Sugar Ray Leonard in a match for the WBC super middleweight title, but lost for a second time.

The year following that win, Roberto, then 47, challenged 28-year-old WBA Middleweight Champion William Joppy, but was defeated in just three rounds. Roberto announced his retirement in 1998, but was back fighting again in 1999.

At 49, Durán avenged a previous loss and won a 12-round decision over Pat Lawlor to claim the Super Middleweight title from the fringe NBA organization. He lost the belt to Héctor Camacho on July 14, 2001, in what turned out to be his final fight.

Later that year, while in Argentina promoting a salsa CD he had produced, Roberto was involved in a serious car accident that left him with broken ribs and a punctured lung. He officially retired in January 2002 with a career record of 103-16-0 and 70 knockouts.

Following his retirement, Roberto remained active as a boxing promoter and was inducted into the World Boxing Hall of Fame in 2006, and the following year into the International Boxing Hall of Fame. He lives with his wife, Felicidad, whom he married in 1969 when he was 17 and she was 14. They have eight children together and many grandchildren. He owns a restaurant in Panama and is also the brand ambassador of Panama Blue, a premium bottled water sold in South America.

Roberto is one of the few boxers to win sanctioned championships in four weight classes and compete professionally across five decades. He is ranked number 28 on The Ring's list of 100 greatest punchers of all time. He is, to this day, considered one of the greatest pound-for-pound fighters of all time.