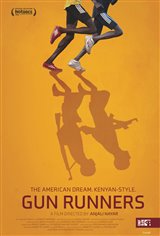 While many Kenyans are considered the best world-class marathon runners, not all of Kenya’s top runners are running for fame and fortune. Some are running for their lives. Julius Arile and Robert Matanda have spent years among roaming bands of North Kenyan warriors who terrorize the countryside. But when they suddenly disappear in their mid-twenties, their peers assume they're dead or have been captured by the police.

Instead, the two men have simply decided to change their lives by trading in their AK-47 rifles for running shoes to become professional marathon runners — in order to offer a better future to their families.