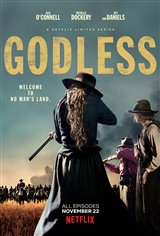 In 1880s New Mexico, notorious outlaw Frank Griffin (Jeff Daniels) and his gang are on a mission to get revenge on Roy Goode (Jack O’Connell). Although Frank once considered him like a son, when Roy did something Frank saw as betraying the brotherhood, he became Frank's mortal enemy. Now he's out to get Roy at all costs, and will kill anyone who stands in his way — man, woman or child.

Roy goes on the run, where he seeks refuge with tough-as-nails widower Alice Fletcher (Michelle Dockery) in the worn-down, isolated mining town of La Belle — governed largely by women since almost all the men died in a mining accident.

When they find out Griffin is headed their way, the women of the town band together, along with their young deputy, Whitey Winn (Thomas Brodie-Sangster) to defend themselves against the murderous gang in the lawless western frontier.