Girls of the Sun 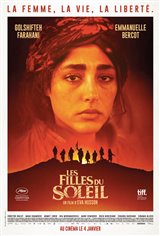 Kurdistan, November 2015. Mathilde, a French reporter who lost an eye during a bombing in Syria, joins a battalion made up entirely of women who escaped after being kidnapped, raped, and sold into slavery. Mourning her fellow journalist who was killed by a mine in Libya, Mathilde establishes links with the commander of the small group, Bahar, whose husband and all the other men in her family were executed before her eyes by Islamists. She and her young son Hemin were taken prisoner and separated, and although Bahar was able to escape, she was unable to locate Hemin to get him to freedom. Desperate to get him back and exasperated by the procrastination of the local army general, Bahar wants to carry out an offensive, believing Hemin to be detained in a school where child soldiers are trained.