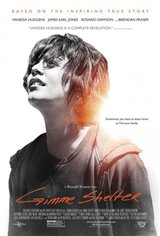 Inspired by real events, Gimme Shelter is based on the story of Kathy DiFiore, founder of the non-profit Several Sources Shelter.

DiFiore’s successful foundation started small, when she first offered her New Jersey home to a pregnant girl in 1981. This brave move came after an inspirational moment that Kathy experienced, in which she felt that she wanted to do something unique in accordance with her Catholic beliefs. Kathy was a successful woman: she was an NYU graduate with an MBA in one hand and a successful Wall Street career in the other. However, she felt that her spiritual life was missing something.

One thing led to another, and Kathy found herself posting an ad in the local newspaper, calling for pregnant girls who needed help to come to her house. Over the next few years, her home was open to many pregnant girls who had nowhere to go. Kathy provided them with emotional and spiritual support, as well as a place to stay. A devout Catholic who always kept Jesus close to her heart, Kathy believes that her project was something that “God wanted to happen.” In an interview with radio show Christopher Closeup, she talked about how her project grew quickly and more people started to give a helping hand.

In 1984, Kathy was faced with an obstacle. The state of New Jersey fined her $10,000 for running an illegal boarding house, even though she was running a shelter. She found a helping hand in another person devoted to helping others: Mother Teresa. “I knew someone who worked at her soup kitchen and he put me in touch with her. She said that she would help me,” Kathy explained. Eventually, Mother Teresa contacted then-Governor Tom Kean and convinced him to look further into Kathy’s project to understand her mission and allow her project to move forward. Not only did Governor Kean exempt her from the rooming and boarding house laws, but he also became one of her supporters.

Kathy’s small project turned into a large-scale non-profit organization, Several Sources Shelter. The organization now runs five other facilities in New Jersey that help young mothers by offering them guidance, counseling and an education. Kathy is also involved in another humanitarian project: LifeCall.org, a pro-life website that provides contact numbers for shelters across America and an emergency hotline for those who need it.

Kathy’s act of kindness turned into an entire foundation that is dedicated to saving babies and helping young mothers. Her story was brought to the big screen in the movie Gimme Shelter, which depicts the happenings inside a women’s shelter and the struggles that young mothers often face.