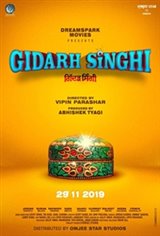 Bittu (Jordan Sandhu) and Lucky (Karn Mehta) are brothers who own a roadside dhaba and desperately want it to become a success so that their needs are fulfilled. But destiny has other things planned for them. Bittu is also an aspiring singer.

His vocals are recorded by a record label but passed on to another singer Satti (Ravinder Grewal), who is extremely influential. Can Bittu reveal to the world that the vocals that everyone loves are his and can Bittu and Lucky collectively put an end to their family's financial problems?