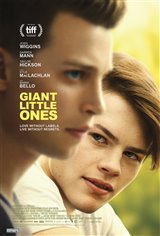 When his father Ray (Kyle MacLachlan) leaves his mother, Carly (Maria Bello), for a man, Franky (Josh Wiggins) is left confused and angry. Things get even worse when Franky and his best friend Ballas (Darren Mann), after getting drunk on the night of Franky's 17th birthday, wind up in the same bed and experiment.

Ballas blabs about what happened to his girlfriend Jess (Kiandra Madeira), and soon the whole school is talking about how Franky came out of the closet and made unwanted advances on his best friend—even though that's not what happened. Bullied by his fellow students, Franky begins to hang out with Ballas' younger sister, Natasha (Taylor Hickson), who's also a target for bullies. As his friends and classmates call him gay, Franky, who always thought of himself as straight, no longer knows what his sexual identity is.