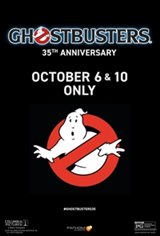 When ghosts go on a rampage, only three men can save the world. It's Ghostbusters, starring Bill Murray, Dan Aykroyd and Harold Ramis as a maniacal band of parapsychologists specializing in psychic phenomena - and super - natural hilarity and they are back on the big screen for a special 35th anniversary event! If you want your spirits raised, who ya gonna call? Ghostbusters! This event features an introduction with newly unearthed and rarely seen alternate takes!