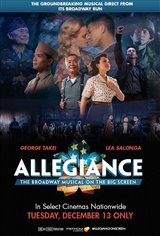 George Takei's Allegiance: The Broadway Musical will be shown on the Big Screen, in select cinemas nationwide for a special one-night event on Tuesday, December 13, 2016.

Straight from its Broadway run, and inspired by the true-life experience of its star George Takei, Allegiance follows the emotional story of a family whose lives are upended by the internment of Japanese Americans during WWII following the events of Pearl Harbor. Their loyalty was questioned, their freedom taken away, but their spirit could never be broken. This special event also features Tony Award-winner Lea Salonga and includes behind-the-scenes footage and interviews with the cast and crew.