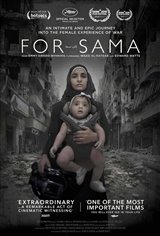 In 2012, when conflict began to sweep through Aleppo, Syria, Waad al-Kateab was a student. Four years later, as one of the last survivors to leave the city in December 2016, she was married to a doctor, Hamza, and was the pregnant mother of a little girl.

This documentary tells her story during the four years, as Waad published harrowing video reports on her Inside Aleppo website. The city, which experienced constant bombings and artillery fire, had victims that counted in the thousands. Waad and Hamza, along with their fellow classmates, joined the protests against Bashar al-Assad's Russian backed army, which committed the atrocities on the civilians of Aleppo.