Ferrari 312B: Where the Revolution Begins 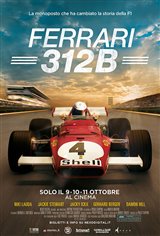 In 1970, Mauro Forghieri, engineer and chief designer of Ferrari, launched a revolutionary new car model supported by the power of a V12, horizontally opposed cylinder engine – the first “flat engine” in racing history. This is how Ferrari 312B was born, allowing its top drivers to experience an extraordinary period of victories that lasted for at least a decade.

Ferrari 312B is a look back at a piece of Formula One history, and a tribute to a car that is considered both a work of art and a futuristic prototype. It chronicles the golden age of Formula One through memorable accounts from its top drivers and production designers who were behind some of the sport’s most unforgettable feats, including legends such as Jacky Ickx, Clay Regazzoni, Niki Lauda, Jackie Stewart, Gerhard Berger and Damon Hill.