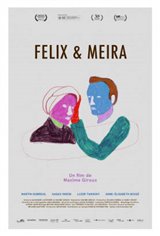 Felix, who recently lost his father, meets Meira, a young Hasidic Jewish mother, at a restaurant in Montreal’s Mile-End district. She’s busily drawing while her baby sleeps in a buggy. Felix, also an artist, slips a sample of his own work in the buggy. Several days later, Meira, who’s unhappy about her strict religion, shows up at Felix’s front door.

And so begins a romantic relationship between the two that will allow Meira to overcome her fears of cutting ties with her religious community and helps black sheep Felix recognize the ties that bind him to his own family.