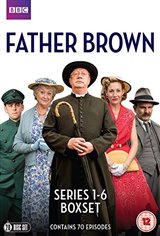 In the Cotswold village of Kembleford in England, Father Brown (Mark Williams) is the priest at St. Mary's Catholic Church. A surprisingly large amount of murders occur in and around the village, and Father Brown is often on the scene.

A ninth season will be broadcast in 2021.

Based on the Father Brown short stories by G.K. Chesterton.