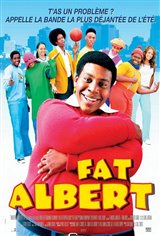 A generation grew up watching Fat Albert and the Cosby Kids, the Saturday morning cartoon series that enjoyed one of the longest runs in cartoon history, airing from 1972-79. It was later reprised as The New Fat Albert Show that ran from 1979-84. Now, Fat Albert makes the jump to the big screen.

As the story begins, Fat Albert (Kenan Thompson) and friends are playing their favorite game, buck-buck, on their home turf: a North Philly junkyard. At the same time, in the real world, a teenager named Doris is watching Fat Albert and the Cosby Kids reruns on television. The unhappy, lonely teen begins to cry, and as her tears fall onto the remote control, Fat Albert hears Doris. The big guy with the big heart stops what he is doing and dives headlong through the television screen – and into the real world – to help her. His friends, Rudy, Mushmouth, Bill, Bucky, Old Weird Harold and Dumb Donald, follow shortly thereafter.

Fat Albert, the ultimate problem solver, is determined to help Doris, even though she insists she doesn’t need his assistance. But as Fat Albert slowly brings Doris out of her shell, he begins to undergo some big changes of his own. For one thing he and his friends are fading. Even more significantly, Fat Albert has discovered love, courtesy of Doris’ foster sister, a lovely high school student named Lauri.

Even more surprises await Fat Albert and his friends in their new world, including Fat Albert meeting his “creator,” Bill Cosby. But as Fat Albert deals with his new feelings and challenges – and races to complete his mission and return to his world before he fades from existence – one thing is certain: While they do their thing, they’re all gonna have a good time!