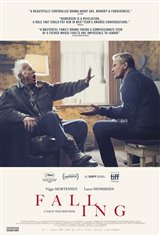 John (Viggo Mortensen) was born to a loving mother, Gwen (Hannah Gross), and a father Willis (Lance Henriksen), who embraces masculinity, taking his son duck hunting while he's a toddler and allowing him to pull the trigger. However, Willis also has a hair trigger temper, which eventually drives his wife away and alienates John and his younger sister Sarah, who alternately hate and fear being in his presence.

When Willis is elderly and begins to show signs of dementia, John brings him to his home in California in order to be able to take care of the man. However, in his elder years, Willis has become more toxic than ever. A stream of racist and homophobic comments constantly flow from his mouth. John, who is gay, is married to another man and has an adopted daughter, but despite his horrific experience as a child with his father, still feels bound by duty to take care of Willis.

A Canada/UK/Denmark coproduction, filmed in Ontario. Producer Daniel Bekerman is Canadian, as is David Cronenberg, who makes a cameo appearance as a proctologist. Canadian actors Paul Gross and Hannah Gross also plays roles.