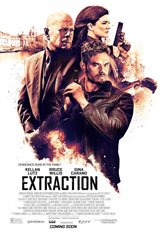 CIA agent Leonard Turner (Bruce Willis) has been taken hostage by terrorists. They release a video of Turner in which he reveals that in 14 hours, if his kidnappers' demands are not met, missiles will be released over the entire continental USA.

When his son Harry (Kellan Lutz) offers to help and is told to keep out of it, he goes on a rescue operation to find the missile codes.