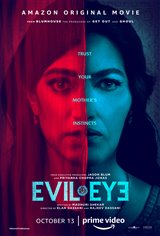 At home in India, Usha Khatri (Sarita Choudhury) is overjoyed when her daughter Pallavi (Sunita Mani) calls from New Orleans telling her that she has met someone. But as Usha learns more about Pallavi's wealthy boyfriend Sandeep (Omar Maskati), she becomes convinced something is wrong.

Mother and daughter are forced to confront dark family secrets as a terrifying supernatural force haunts them.